A letter from a birthmother.. 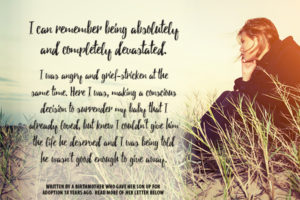 I was 19 and pregnant. I had met my husband in Seattle, WA and married him when I was 18, he was 26. We were kind of vagabonds at the time, picking up and moving to a new place every few months. We had lived in Seattle, Flint, Michigan, and I was then living in Savannah, Georgia when I was pregnant with my son.

I was making dumb choices with my life at that time but knew enough about my choice in husbands that it would be an unsafe, unstable and violent environment to bring any child up in. Abortion was never an option for me and I really had not considered adoption either. I had considered running away but was not prepared to run home and admit I was wrong and be pregnant too.

To this day, I can see the phone booth I was standing in at a mall in Savannah. I had opened the phone book to the first page- Adoption Agencies. As I struggled to keep the thing open and on the little metal shelf, I dialed the first one. They asked a series of questions and stated they would NOT be able to help me because my child was going to be bi-racial. In a nutshell, I am white and my husband was black. I called about 5 or 6 adoption agencies, all of which said they couldn’t help me because my baby would be bi-racial (one even stated they only dealt with Jewish babies!).

I can remember being absolutely and completely devastated. I was angry and grief-stricken at the same time. Here I was, making a conscious decision to surrender my baby that I already loved, but knew I couldn’t give him the life he deserved and I was being told he wasn’t good enough to give away.

And that’s how I called one more time and got The Open Door Adoption Agency.

I cannot remember who it was I spoke to but her answer was, “We can help you, I even know a family that may be just the right one for your baby.” It could not have been more perfect.

The family who adopted my son has, in a nutshell, a white mom and a black dad. I never met them. I chose a closed adoption because I felt I couldn’t handle watching someone else raise my child, I didn’t want to see everything I would miss out on. In hindsight, I wish I had chosen a more open one because the few pictures and letters I did get were more precious than I can say. To see my son grow up through pictures was a healing balm to my heart.

That was 18 years ago and I am nervously, prayerfully and longingly awaiting the day I can lay eyes on him again and share my family with him. I can’t wait to admire the work that his parents provided when I couldn’t.

I recently called The Open Door agency and was wildly blessed to speak to Kelly, a fellow birth mom who was willing to share her story and spend extra time offering advice and encouragement to me from way across the country.

Thank you, Kelly! Words cannot express how amazing it was to talk to you.